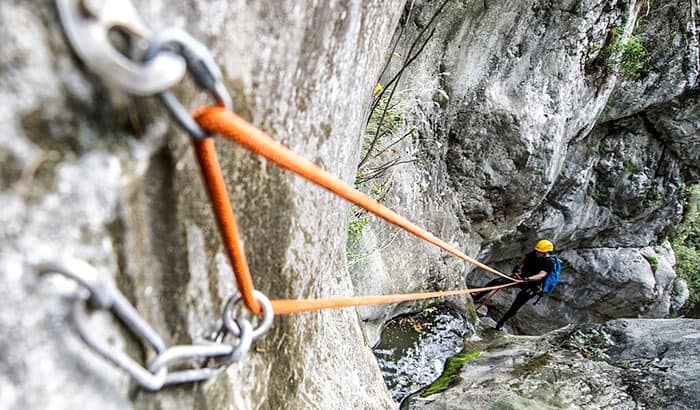 The rope is considered the lifeline of every climber. It is a very important part of any climbing activity, but there are many types of ropes you can use during the climb. Two of which are half rope and twin rope. But what is the difference between the two? This article will compare half rope vs twin rope and what these two ropes provide to every climber.

Many newbie climbers said that half rope is complicated to use. Half ropes require a climber to climb in two ropes, but you will still tie in one rope on each side of the belay rope of your harness.

Those half rope systems should be familiarized for climbers who want to climb on icy locations. Climbers who also want to navigate sketchy rocks or trad routes can use the full potential of this rope. In the half rope system, the climber will be tied in and belayed in two ropes. But, the climber will be clipping a single rope to each piece of protection.

In terms of physical structure, half ropes are skinny in width, and they stretch quite a bit. The result of this physical feature is the reduced amount of force being applied to each of the protection.

Another benefit of using a half rope is the ability to have a long rappel since you have two ropes in your position. Most half ropes in the market today are rated so that climbers can second on a single strand, but this can be complicated when a climber is hanging a skinny rope during the climb.

Just like half rope, the climber will be tied in two ropes, but the ropes must be clipped with all the pieces of gear. Using twin ropes brings several advantages, such as splitting the ropes between two climbers and having a long rappel.

Using a twin rope will make the climber maximize the rope’s full strength when rappelling. For example, if a climber uses a 60-meter long twin rope, he should be able to rappel using the full 60-meter length of the rope.

Furthermore, using two ropes means you will have an extra rope should one of the strands be damaged from the sharp rock during the climb. Twin ropes are also skinny, which means they are stretchy and significantly reduce the amount of force put on the gear when there is a fall.

The Difference Between a Half Rope and a Twin Rope

Twin ropes and half ropes can be compared by a few factors. Please see below:

Both half rope and twin rope provide extra security. If you are climbing a route with sharp rock or edges, it is not likely that the two ropes will be cut by a twin rope. This protection can also be provided by half rope, but this type of rope is perfect and is excellent in protecting meandering routes and traverses.

Both half rope and twin rope are skinny. However, to be specific about it, twin rope is more skinny than half rope. In fact, most of the half ropes come in the range of 8mm to 9 mm in diameter. However, the diameter of a twin rope is skinnier as it usually ranges less than 8 mm.

Climbing and belaying using twin ropes and half ropes are entirely different. Because the twin ropes are clipped on the same anchor point, it gives the ability of the belayer to belay the two ropes as one.

On the other hand, half ropes come with a different belaying technique since the ropes are clipped on different anchor points. As a result, the climber as well as the belayer needs to keep track of each rope.

Tracking the weight of half rope and twin rope is also important to know the difference between the two. Traditionally, half ropes are heavier compared to twin ropes. In addition, they are also more expensive in terms of the pricing in the market.

In comparing half rope vs twin rope, you will be asking what is the best rope system for your climb? To answer the question really depends on your preference and the type of climbing activity you are doing since it presents different types of challenges. It is all about choosing the rope which gives you the efficiency and safety you need during the climb.