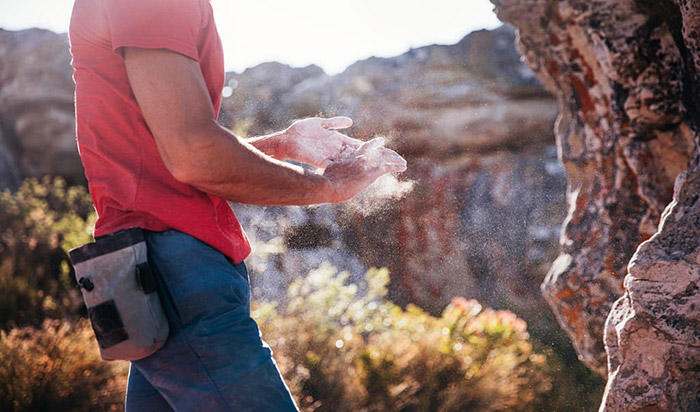 When I was new to climbing, my curiosity made me always wonder why do climbers use chalk?

Chalk is an essential tool for every climber to minimize moisture built-up in hands and increases friction and grip, which is needed during the climb.

But what does chalk do for rock climbing? Why do rock climbers use chalk? All of these questions will be answered in this article as we try to explain the importance of chalk and how it helps every climber in every climbing session.

The Real Usage of Chalk for Climbers 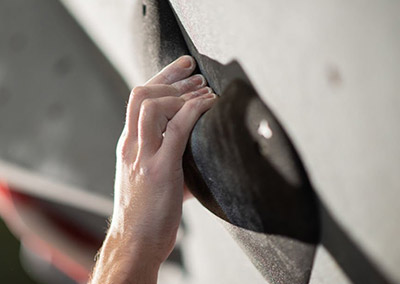 It is natural for any climber to sweat in any given climbing activity. Since our body is like a moisture-emitting machine, any movement during the climb will generate and secrete oil, sweat, and other forms of moisture.

Just like other forms of physical activity, climbing creates different forms of moisture, making you sweat a lot. Sweat and oil will appear on the different parts of your skin, which is good when exercising but not with climbers.

In any climbing activity, a small amount of moisture in the hands can affect performance and spell the difference between the success and failure of your climb. In this situation, climbers use chalk or magnesium carbonate to dry the moisture, such as sweat in the hands. Furthermore, applying the chalk can increase friction and improve the holding grip.

Most climbers use magnesium carbonate-based chalk to reduce the moisture and sweat from the hand. This moisture can cause slipping, which does not happen when climbing. The chalk is the drying agent that will help enhance hand friction, which can help improve the grip.

History of Using Chalk When Climbing

Today, chalk is an essential tool every climber must have in every climbing session. But how did it start? The use of chalk was brought into the climbing world in 1954. John Gill, also known for inventing bouldering, was the first to use chalk to eliminate hand moisture.

Since Gill also practices gymnastics, where chalk is used as a drying agent, he realized that the properties of the chalk could also be used in any given climbing activity. During the 1950s, John Gill visited several climbing areas, which he turned into short and dynamic routes, which we call boulder problems today.

With Gill’s discovery, more and more people have been using chalk during the climb. Today, it comes in different styles and forms, showing its evolution. Today, chalk for climbing usually comes in three forms: fine powder, blocks, and liquid chalk.

Is Chalk Bad for the Environment 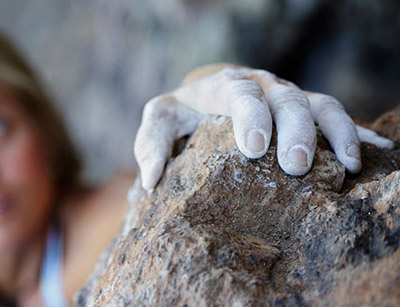 Chalk is essential to every climber, but the downside of using this tool is its negative impact on the environment. The list below will summarize all the destruction chalk can create for mother earth.

Today, there are about 24 million climbers worldwide, and each uses chalk in every climbing activity. Individually, it may not be a big issue when using chalk, but if you combine them all together, that is a huge amount of chalk waste that can destroy and damage rock formations.

The loose chalk that every climber leaves can be easily seen in rock formations. If you think this chalk residue will be washed out, think again. Chalk will stay on the wall and never be removed unless intentionally bruised or wiped off.

This permanent visibility of chalk residue is like visual pollution among environmentalists. Furthermore, the chalk can accumulate over time and make the route polished, making it unclimbable.

Making a Chalk is Destruction to the Environment

Climbing chalk is made from magnesium carbonate, which is extracted from dolomite. The way it is mined and processed also causes a negative impact on the environment. In areas where dolomite mining happens, magnesium particles usually end up in the air affecting the communities.

Every environment with dolomite mining has already suffered from contamination and habitat loss. All of these negative impacts coming from the environment can affect all living organisms in the area.

There is a valid reason why do climbers use chalk, and it is all about helping the overall performance of the climber by eliminating the moisture in the hands. But does it work to continue using powder chalks during any climbing session, knowing that it negatively impacts the environment?

As climbers, there are many ways that we can do to lessen the chalk’s negative impact. Using lesser chalk when climbing can quickly be done, but it’s the most challenging thing to do performance-wise. But if you love the environment, start reducing chalk usage to lessen its impact on mother earth.