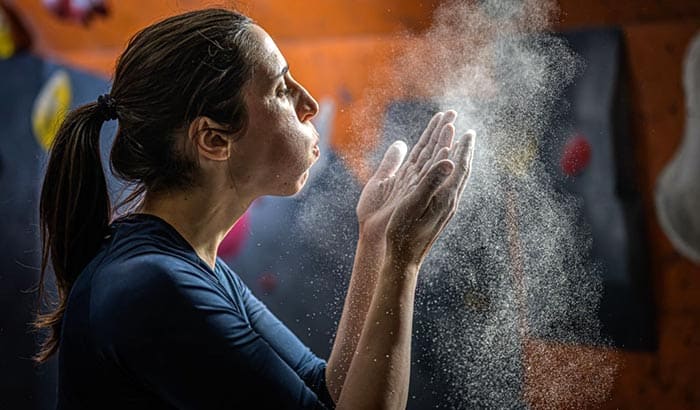 There is no denying that climbing chalk is essential to every climber. Its ability to provide better grip and improve the friction between the palms against the rock or the bar helps the climber as he goes up. But what is climbing chalk made of? In this article, we will know the chemical composition of climbing chalk and how it is made.

Other manufacturers have come up with different ways to improve the performance of magnesium carbonate. Combining it with other minerals and ingredients was done to keep them ahead of the competition. Among those elements added to enhance the effect of magnesium carbonate are limestone, essential oils, and even drying agents.

Even the most expensive chalk in the market today uses a purer magnesium carbonate to increase its effectiveness. The more refined the magnesium carbonate is, the better it is to fill up the skin pores, increasing the absorption ability while improving the friction.

In 2013, a group of researchers in nanotechnology from Uppsala University discovered Mesoporous Magnesium Carbonate. In its first publication, this mineral was named Upsalite in honor of the people who found it.

Four years later, this mineral was first patented as Upsalite and is now a registered trademark which is designated to the Mesoporous Magnesium Carbonate. A year later, the company Black Diamond introduced Upsalite in the global market as an ingredient of climbing chalk through the ISPO, one of the most extensive sports exhibits.

Due to its ability to absorb moisture, the substance has been used by climbers as well as other athletes to improve their grip. In fact, it was awarded as the best new and innovative climbing accessory during that year.

Basically, Upsalite is just another form of Magnesium Carbonate but comes with a greater surface area. It has been said that because of this property, this substance provides more excellent moisture absorption, which provides benefits to the climber.

Different Types of Climbing Chalk and its Components 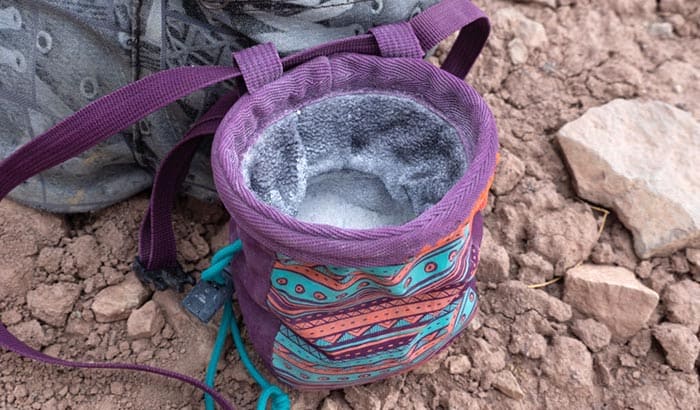 Because of this situation, different types of climbing chalk have been formulated through the years. Please see below:

Liquid chalk is a combination of two different components: Magnesium Carbonate and alcohol. Usually, the alcohol dries away in your hand, leaving the magnesium carbonate to do its job. The best thing about liquid chalk is it’s easy to put in the hand. Liquid chalk can also provide excellent coverage on your hand due to its liquid form.

However, liquid chalk is a little bit heavier because of its container and is messier because of its liquid form. It will also take time to see the chalk on your palm because you will be waiting for the alcohol to dry.

Typically, a liquid climbing chalks as a primary layer before using the other types of climbing chalk. Some climbers tend to use it first then apply powder chalk after. The reason for it is that the liquid chalk will help in sticking the other chalk on the palm of the climber.

This type of climbing chalk is probably the cheapest among all forms. It is because the manufacturers try to produce the chalk in a block form. The reason for it is that the manufacturer can cut the manufacturing post as they no longer crush and filter it.

The downside of having block chalk is it can be messy once you start breaking it into smaller pieces. Crushing it will require some effort on your end. Nonetheless, it still offers effectiveness in enhancing the friction and the grip of the boxer.

This type of climbing chalk is probably the more popular chalk in the market in terms of purchase. But powder chalk comes in different forms and consistency. Some powder chalks come in very fine dust, while others come in powder chunks.

Powder chalk comes with some upsides and downsides, but this type of climbing chalk can be messy with its refined form. Powder chalk tends to get a little bit messier because of its shape, as it tends to escape from the chalk bags.

Meanwhile, because of this situation, some manufacturers have developed chalk balls. It’s basically powder-climbing chalk that was converted into balls or chunks. This form somehow reduced the powder form’s messiness to the climber.

You will put the powder chalk in refillable chalk socks while putting the chalk balls on the chalk bag. The climber will then squeeze for the coating of these hands during the climb. It may take some effort, but experienced climbers prefer this method more.

Climbing chalk is essential for every climber. But do you know what is climbing chalk made of? It is primarily made of magnesium carbonate and has been developed into various forms over the years. There are different types of climbing chalk, and choosing the right one will be based on your preference.