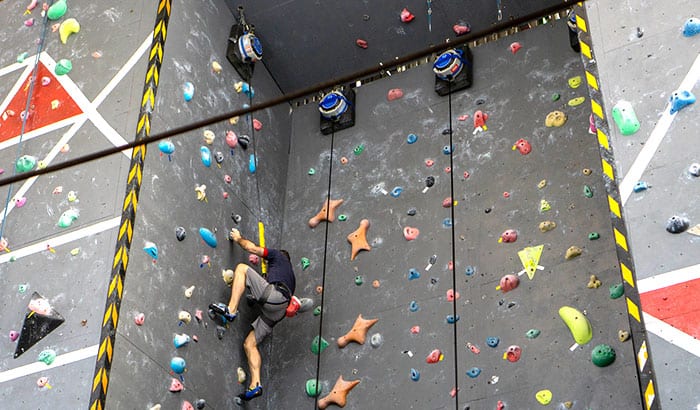 There is no denying the importance of auto belays in helping anyone climb and do their own thing without the assistance of anyone. This climbing device allows a climber to climb without a belayer. But how do auto belays work? How does it make any climber safe during the climb? The answer to these questions and other related information can be found below.

Understanding Auto Belays and How it Works

An automatic belay device or auto belay is actually a climbing device that can control a climber’s descent. There will be moments when a climber will not have the luxury of having someone to serve as his belayer during the climb. This device’s function eliminates a belayer and lets the climber do his own thing alone.

The auto belay’s main faction is to take up the slack during the climb to eliminate anyone to serve as the belayer. As the climber reaches on top or even if someone falls, the device will automatically catch the climber while slowly taking him to the ground.

The purpose of the auto belay is very simple, yet it’s very important to every climber who is using it. In climbing gyms, this device is very popular and has been used extensively. But to be able to appreciate how auto belays work, you must be familiar with how it is constructed and how the mechanism and parts inside it works.

Parts of an Automatic Belaying Device

An automatic belaying device has two main parts: the outer shell and the internal parts or mechanism.

The outer shell is basically what you see on the outside of the device. The shell is made of a metal case that provides durability and toughness to protect all the parts inside. Also part of the outer shell is the installation handle which serves as the device’s anchor to the wall.

The inner parts of the automatic belaying device consist of small components that play an essential role in the overall function of the device. The nylon lanyard, which is the one that the climber will clip, is one of its components. Then, there is a spring-loaded center spool where the lanyard is coiled tightly.

When going on top, most auto belays use the exact mechanism in controlling the ascension of the climber. The lanyard will be controlled by a retraction spring as the climber goes up. In the descent, there are two types of auto belays that a climber can use. Please read below.

Two Types of Braking System in an Auto Belay Device

There are two types of braking systems that an automatic belaying device uses to control the descent of a climber. Please see the list below:

This type of auto belay uses a magnet as its braking system. It is actually composed of two magnets found inside as part of the internal mechanism of the device and is attached to a rotor. As the climber descends after reaching the top, the magnet will control the climber’s descent.

But how does the magnet do it? As the climber starts to descend, the force created coming from the slack will be pulled out, resulting in spinning the rotor. Once the rotor spins, it will send the magnet outwards, coming from the center of the spin.

This situation will result in an outward motion, which will make the magnets close to the metal plate, which usually curves around the rotor. The moment the magnet gets closer to the plate, it then produces an electromagnetic force responsible for slowing down the climber’s speed as it goes down.

This type of braking system of an auto belay relies on centrifugal force to control the climber’s speed during the descent. But what do you mean by a centrifugal force? It is actually a force created when an object spins or moves in a circular path.

In a friction-based auto belay, a drum brake is an essential device component. The lanyard will be coiled or wrapped around the drum brake but uses the so-called centrifugal force in slowing or making the climber’s speed comfortable during the descent.

The drum brake, which is also the center spinning wheel of the auto belays, will be engaged in the opposite direction as the climber descends. The weight of the climber actually creates the centrifugal force.

The centrifugal force will then push the brake pads inside against the drum brake, which reduces the speed or downward motion of the descent. It will slow down the speed of the descent into a more controlled and safe speed.

This type is the oldest auto belay system and uses hydraulic as its primary braking system. In this type, a hydraulic cylinder assembly is installed at the back of the climbing wall and is attached to a cable. Then, pulleys will be the ones to redirect the cable to the other side of the wall as it comes down while securing the climber.

Any fall or downward force transmits a force to the assembly, which creates a positive pressure that keeps the cable stretched as the climber ascends. The downsides of this very old type of auto belay are its expensive maintenance and tendency for fluid leaks.

For every aspiring climber, learning how do auto belays work is essential for anyone to be familiar with the importance of this climbing device. Apart from allowing anyone to climb alone, it also helps make the climber safe and more efficient during the climb. Safety is always a priority in every climb, and an automating belaying device can give you that.